In Ephesians chapter six, Paul talks about the armor of God. Roman soldiers were a

common sight in his time all over the Empire, and so when he used the Roman soldier as an illustration of the armor of God, it was easy for the people to understand and visualize what he said. Paul said that the shield represented faith, which quenched the fiery darts of the enemy. The shield was effective in protecting the individual soldier from the front, but it couldn’t protect from simultaneous attacks coming from the sides and rear. Something more was needed to protect the soldiers from these hazards, so the Romans used the “testudo” formation.

There are two movies (“The Eagle” and “Risen”) which have good reenactments of how the Romans used the testudo formation which turned their formations into what would be called an armored personnel carrier today. When their commander ordered “testudo,” the soldiers would position their shields to create a protective wall and overhead cover. This protected them from above, the front, sides, and rear. It took practice and discipline to perfect it, but once they were able to master it, this team effort by the Roman soldiers allowed them to conquer objectives that would have been impossible otherwise. 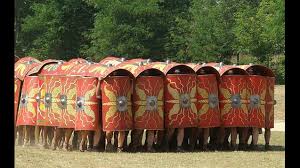 I mention this because in the same way the Romans used the testudo formation to win battles, the church needs to use its shields of faith the same way more than ever. The testudo could not be achieved by a single soldier, it took a number of them to properly deploy it. This demonstrates the advantages of a group, and Solomon wrote about the advantages of numbers when he said:

Two are better than one because they have a good return for their labor. For if either of them falls, the one will lift up his companion. But woe to the one who falls when there is not another to lift him up. Furthermore, if two lie down together they keep warm, but how can one be warm alone? And if one can overpower him who is alone, two can resist him. A cord of three strands is not quickly torn apart. (Ecclesiastes 4:9-12, NASB)

It’s not enough to have sufficient numbers for your battle plan; you must have agreement of purpose and unity. The saying goes “two captains sink a ship.” If one is trying to go left while the other is trying to go right, what’s the advantage in numbers? The prophet tell us this: “do two walk together, unless they have agreed to meet?” (Amos 3:3, ESV).

We need to unite our shields of faith church, but the problem is that the church has become fragmented and it’s fighting the wrong enemy and the wrong war; it’s actually fighting against itself! We find the same pattern in the Corinthian church when Paul wrote his first letter to them:

Now I exhort you brethren, by the name of our Lord Jesus Christ, that you all agree, and there be no divisions among you, but you be made complete in the same mind and the same judgment. For I have been informed concerning you, my brethren, by Chloe’s people, that there are quarrels among you. Now I mean this, that each one of you is saying, “I am of Paul,” and “I of Apollos,” and “I of Cephas,” and “I of Christ.” Has Christ been divided? Paul was not crucified for you, was he? Or were you baptized in the name of Paul? (1 Cor 1: 10-13, NASB)

This pattern of division still exists today: we hear “”I am of Southern Baptists,” “I am of Methodists,” “I am of Presbyterians,” etc. Denominational loyalty isn’t the only source of division, many congregations have exchanged the truth of God for friendship with the world. Then there are internal quarrels which pit brother against brother, and there have been ugly church splits. In a way, attacks from within the church are worse than an attack from the enemy because we expect hostility from an enemy, but not a brother or sister. David was a man who knew betrayal, and he describes the hurt this way:

For it is not an enemy who reproaches me, Then I could bear it; Nor is it one who hates me who has exalted himself against me, Then I could hide myself from him. But it is you, a man my equal, My companion and my familiar friend. We who had sweet fellowship together, Walked in the house of God in the throng. (Psalm 55: 12-14, NASB)

Our Adversary knows our weapons are divinely powerful to pull down strongholds and spiritual wickedness, bu he can nullify that if he can get us fighting against each other. Keep this in mind though: Even if a brother or sister has caused us grievous harm and betrayed our trust, we must not allow this to sow the seeds of bitterness and forgiveness in our heart, which will choke the word of God and cause many to be defiled.  We must still obey the Lord’s commandment to love one another. Forgive that person, and get your weapons trained back on the real enemy.

Let me get back to the shield of faith in closing. We need to unite our shields of faith like never before, and the enemy knows the damage that this will do to the kingdom of darkness, so he does everything he can to divide us and set us against each other. In faith, one of us can put a thousand to flight, and two of us ten thousand. If one man like Elijah can pray in faith and stop the rain from falling for three and a half years (James 5: 17-18), then Satan would fall from heaven like lightening and multitudes of multitudes of souls would be set free if many of these men and women of God united their shields of faith in a spiritual testudo.

Way down in the valley, I heard a mighty roar!

It was the sound of the Army, the Army of the Lord!